Hank Nuwer is a  journalist who writes on education, books and authors, sports, health and the environment. He accepts some freelance assignments at Hnuwer@franklincollege.edu.   He maintains the Hazing Deaths database (to be updated publicly in his new book, Hazing in American Culture, January 2023.   He is a professor emeritus at Franklin College. 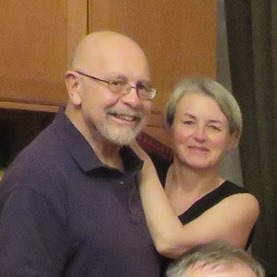 He has written books on the topic of hazing in society including Hazing: Destroying Young Lives, Wrongs of Passage, High School Hazing, Broken Pledges, and The Hazing Reader.

He has written books suitable for teens including Sons of the Dawn, High School Hazing, The Legend of Jesse Owens, Steroids and To the Young Writer.

Ball State University awarded him its doctoral equivalency for his research and publications in 1986 and elected him in 2010 to the BSU Journalism Hall of Fame.

He is married to Malgorzata (Gosia) Wroblewska-Nuwer. He has two grown sons and two grandchildren. Gosia has one grown daughter, a Ph.D. in biology from Cambridge.

The couple lives in Indiana and Warsaw, Poland–with frequent visits to their Alaska properties in Tok and Alexander Creek, AK.

His interests include travel with his wife Malgorzata, collecting tropical fish and authors on international stamps, flyfishing, riding horses, and reading (of course).

Hazing: Chapter 14, Nuwer and Bollinger. In Violence Goes to College–HazingNuwerBollinger

The Hazing Death of Henrietta Jackson at Cornell University Excerpt

READ AN EXCERPT: Death of an innocent bystander–Dead to Rites: The Chlorine Poisoning of Henrietta Jackson

Video: The Death of Henrietta Jackson with Interviewer Mike Ayalon of Greek University

Get it directly from Indiana University Press

Thanks for reading and possibly reposting. I am grateful to EVERY contributor who wrote an essay for “Hazing: Destroying Young Lives.”

Elizabeth J. Allan is a professor of Higher Educational Leadership at the University of Maine. Her research on hazing is often noted by national media. She is the principal investigator for The National Study of Student Hazing.

Travis T. Apgar served Cornell University as the Robert G. Engel Senior Associate Dean of Students from 2006 to January 2017. An authority on hazing prevention, he is currently Assistant Vice President and Dean of Students at Rensselaer Polytechnic Institute.

Ray Begovich teaches as a Pulliam School of Journalism faculty member at Franklin College. He is at work on a biography about Elmer Davis, a onetime Director of War Information in World War Two.

Brian Crow is professor of sport management at Slippery Rock University. He has presented and written extensively on hazing in sports and is an expert on sports law.

Douglas Fierberg established a legal practice specializing in the representation of victims of school violence, now operating as The Fierberg National Law Group. Fierberg also founded the national litigation group, Schools: Violence, Misconduct, and Safety, which operates within and under the authority of the American Association for Justice.

James F. Keenan, SJ, holds the Canisius Chair at Boston College and is director of the Jesuit Institute. He is the author of University Ethics: How Colleges Can Build and Benefit from a Culture of Ethics.

Michael Kimmel is the author of Guyland: The Perilous World Where Boys Become Men and author or editor on more than twenty books on gender studies. He is professor of sociology at the State University of New York, Stony Brook.

Peter F. Lake is Professor of Law, Charles A. Dana Chair and Director of the Center for Excellence in Higher Education Law and Policy at Stetson University College of Law. He is a graduate of Harvard Law School and author of the seminal The Rights and Responsibilities of the Modern University.

Malinda Matney works as Senior Research Associate for the Division of Student Affairs at the University of Michigan. Matney is the former national president of Kappa Kappa Psi National Honorary Band Fraternity.

Tracy Maxwell is the founder of HazingPrevention.Org. She has been working in and around higher education for more than 25 years. She currently speaks about hazing for CAMPUSPEAK. Her work as a healing coach assists survivors of hazing and their families.

Colleen McGlone is an associate professor in Recreation and Sport Management at Coastal Carolina University. Her Ph.D. is in Sport Administration from the University of New Mexico.

Chloe Neely is in law school at New York University and is clerking for The Fierberg National Law Group. Neely secured a federal clerkship and plans to represent survivors of sexual assault.

Hank Nuwer has written The Hazing Reader and Wrongs of Passage for Indiana University Press. He has also performed a one-man play about hazing called “The Broken Pledge,” and he penned the novel Sons of the Dawn: A Basque Odyssey that concerns hazing in the American West.

Gina Lee-Olukoya is associate dean of students at the University of Illinois at Urbana-Champaign. She is a member of Delta Sigma Theta Sorority, Inc., and serves on the foundation of Hope Street Youth Development. She formerly served as a board member on HazingPrevention.com.

Norm Pollard is the dean of students at Alfred University, a licensed mental health counselor and certified Title IX investigator. Pollard was the co-author with Nadine Hoover on a seminal study of hazing among athletes and hazing in high schools in the United States.

Debbie Smith is the founder and CEO of AHA! Movement, a non-profit organization created in memory of her son, college student Matt Carrington. Matt died in 2005 after enduring a horrific water hazing pledging at a fraternity in Chico, California.

Ashley Stone is an academic counselor in the African American Academic Network (AAAN) at the University of Illinois at Chicago (UIC). Stone has used her background in non-violence education and sociology to create identity-conscious programming for various audiences.

Susan P. Stuart has written many essays on education law. Retired as dean from the Valparaiso University School of Law, she credits her research assistants who assisted her: Colleen Clemons, Emily Calwell France, Adam Miller, William Horvath, and Shay Hughes.

Allison Swick-Duttine is director of fraternity/sorority Life at SUNY Plattsburgh. She was a founding board member and a past president of HazingPrevention.org.

David Westol, JD, is the Founder of Limberlost Consulting, providing strategic planning and consulting to campuses, organizations and foundations. A former executive director of Theta Chi Fraternity, he once served as an assistant prosecuting attorney in Kalamazoo County, Michigan.

Ed Whipple is vice president for campus life at Willamette University. He holds a doctorate from Oregon State University and is a member of the Phi Delta Theta General Counsel.

Sarah Wild is a certified counselor based in North Carolina with a professional background in fraternity/sorority advising and career counseling.

Link to the Legend of Jesse Owens page

Cited by The Atlantic magazine.

Keenan, J.F. “How Colleges Can Build and Benefit from a Culture of Ethics.” (Lanham: Rowman and Littlefield, 2015).

Kimbrough, Walter. “Why Students Beat Each Other,” in Creating and Maintaining Safe College Campuses by Jerlando F. L. Jackson, Stylus, 2007.

Gervais, Joe. “In the Name of Obedience: Overcoming the Damaging Myths about Hazing,” in Prettyman, Sandra Spickard and Brian Lampman, Learning Culture Through Sports, Exploring the Role of Sports in Society, Rowman & Littlefield Education, 2006.

Horner, Carl S. The Boy Inside the American Businessman, University Press of America, 1992.