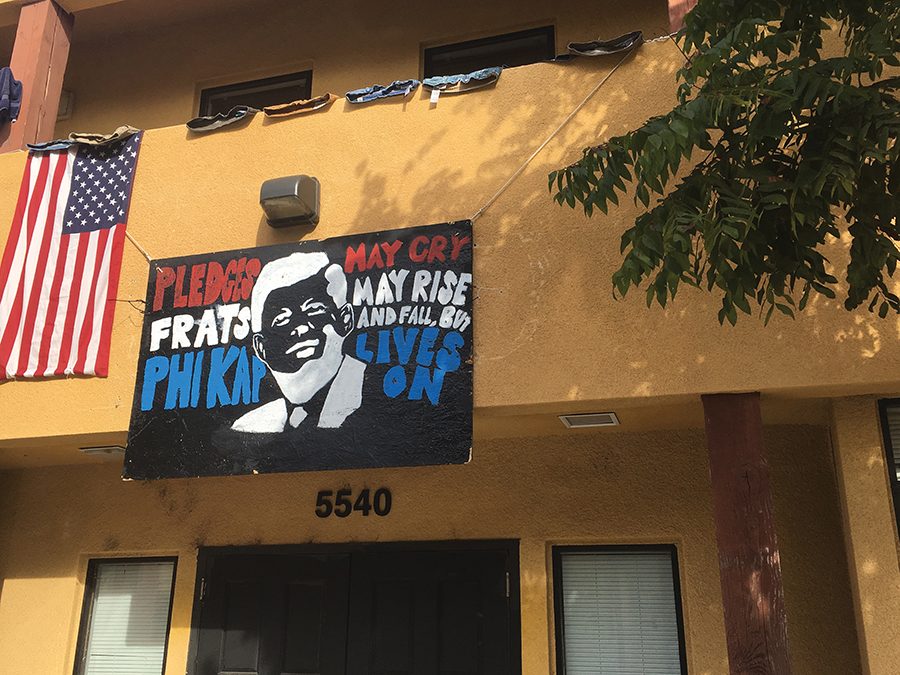 A sign displayed on the former Phi Kappa Theta chapter house the week after the fraternity’s expulsion from campus.

A fraternity kicked off campus last semester had a six-year history of violations before the university finally expelled it, documents obtained by The Daily Aztec show.

The final straw for Phi Kappa Theta was a September incident involving apparent underage drinking, and not even an eleventh-hour email from its former president Chris Thomas — from his official A.S. officer email account — could save the fraternity from expulsion.

Emails obtained via a California Public Records Act request also show both the university and the fraternity’s national office moved to prevent information about the chapter’s expulsion from being released to the public.

When The Daily Aztec inquired about the specific reasons for Phi Kappa Theta’s removal, Caryl Montero-Adams, the assistant director of Student Life and Leadership for Greek life, told an SDSU media relations officer in an email that in the past, officials “have communicated the founded policy violations (ex. alcohol) without disclosing the specifics related to the incidents. That said, I believe that any specifics given would need to be discussed and approved with (Dean of Students Randy Timm and Associate Vice President for Student Affairs Christy Samarkos).”

The specifics were ultimately not provided to The Daily Aztec until a California Public Records Act request was submitted.

The national Phi Kappa Theta organization also would not return requests for details on why the fraternity’s charter was revoked.

“(The Daily Aztec) reached out to us again over the weekend looking for more specifics,” Robert Riggs, national executive vice president of Phi Kappa Theta, said in an email to Montero-Adams. “We determined that no additional information would be shared and did not respond to his follow up request.”

A history of violations

The San Diego State chapter of Phi Kappa Theta had a long history of brushes with university administrators.

In February 2011, it was placed on an interim suspension for unspecified alcohol violations.

In April 2012, it was suspended after then-Sigma Alpha Epsilon president Barzeen Barzanji died of an overdose at the Phi Kappa Theta house. The fraternity was later absolved of responsibility in his death.

In January 2014, the university again placed the fraternity on an interim suspension for the violations in the fall. The national Phi Kappa Theta office then placed the SDSU chapter on a complete suspension in February.

In September 2014, the fraternity again faced allegations about alcohol violations, and the following month an unapproved event with alcohol was hosted in which a student fell from a balcony at the chapter house.

The fraternity was placed on another interim suspension in October 2014.

A little more than a year later, in December 2015, a Phi Kappa Theta member was involved in a physical and verbal altercation at the chapter house that resulted in him being taken to detox.

And in September 2016, a social event resulted in fraternity members being treated for intoxication while another event was found to have included new members — who are usually underage — drinking alcohol.

One person, who identified themselves only as a fifth-year senior and a “concerned Greek,” expressed concern in an email to Montero-Adams about the September 2016 incidents. The person mentioned a Snapchat video they claimed showed Phi Kappa Theta members drinking hard liquor during the university dry period, which lasts from Aug. 1 to Oct. 1 of every year.

The “concerned Greek”  also included an image of a Snapchat message purportedly sent from a Phi Kappa Theta member soon after the fraternity was taken off probation.

“Silence is over and PHI KAP IS BACK!! We just gave out bids to the tallest, strongest, make-you-drip-from-down-unda frat stars on campus. Tomorrow night, we all black them out and welcome them to state the right way. Handles and all sorts of things will be going down throats tomorrow night, so mob Tiki at (address redacted) 63rd st. at 9:30 if you want your world changed forever. These kids are f***ing sick. We’re back, so let’s black.”