Extensive CNN coverage of the Pennsylvania verdict against a Baruch fraternity and its national http://www.cnn.com/2018/01/08/us/michael-deng-fraternity-sentencing/index.html

Four men plead guilty Monday May 15, 2017 in connection to the death of Michael Deng in 2013. Deng died of his injuries sustained during a hazing ritual during a fraternity trip to the Poconos in Pennsylvania.
“To a lesser extent it’s also a tragedy for Mr. Lam and the other young men. They never intended for this to happen,” he said, adding Lam had been “guilt ridden for his conduct since the day it happened.”
An attorney for Wong told CNN on Sunday, “Sheldon remains, and will always be, deeply saddened and devastated by Michael Deng’s death.”
Lawyers for the two other individuals could not be reached for comment.

Some experts believe the prosecution and subsequent outcome of the Deng case is a signal that courts are taking a tougher stance on hazing deaths than they have in the past.
Hank Nuwer, a professor at Franklin College in Indiana and a journalist who has been writing about and tracking hazing deaths for decades, described the fraternity’s sentence as “groundbreaking.”
“I think it’s one of the toughest ever,” he told CNN on Monday.
“It’s sending a definite message,” he continued. “It’s sending a message that (national fraternities) are considered — by this court and by the judge — to be accountable when one of their pledges are killed.”
Nuwer previously said the verdict against Pi Delta Psi and the court’s handling of the case showed “huge changes” from when he first started tracking hazing deaths and the criminal proceedings around them in the 1970s.
“Judges are taking it more seriously,” Nuwer said Sunday, adding that lawyers who didn’t know how to bring a case against fraternities in the past now have greater understanding of how to handle such cases.
Doug Fierberg, an attorney for Deng’s family who has represented multiple high profile hazing victims in the past, previously told CNN the verdict showed that “national fraternities can and should be held criminal and civilly responsible for the injury and death caused by their members. The criminal prosecutions shows that can happen and should proceed that way and they can be convicted.” 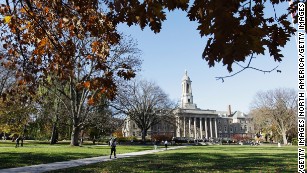 Deng was a freshman when he traveled to a rented house in Pennsylvania’s Poconos Mountains for the Asian American fraternity’s “crossing over” weekend, according to a criminal complaint.
It was there Deng ultimately suffered and died from a traumatic brain injury while participating in “the glass ceiling,” a ritual that required pledges to run through a line of fraternity brothers who shoved, pushed and tackled the aspiring members to the ground.
At some point, Deng, who was blindfolded and wearing a weighted backpack, fell, struck his head and was immediately unconscious, according to police. Some fraternity members placed Deng by a fire while others searched the internet for his symptoms and tried to wake the pledge. 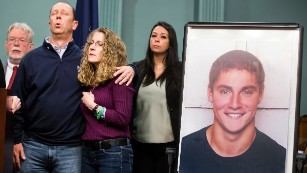 Frat death shows something is terribly wrong with Greek life
Meanwhile, the criminal complaint said, other fraternity members were told by a member and the national fraternity president to “protect the fraternity and hide all the memorabilia” from police — including clothes, fraternity paddles, banners and signs. They were also instructed to conceal cellphones, marijuana and mushrooms, the complaint said.
Deng arrived at a nearby hospital for treatment 2 hours after he was injured — a delay that a forensic pathologist concluded “significantly contributed to the death of Mr. Deng,” the complaint said.
Deng’s death was ruled a homicide.