Nicky Cumberland died after a car accident on his way home from the group’s retreat, where recruits were paddled and plied with alcohol and one student bit the head off a live hamster.

HOUSTON — Fraternity pledge deaths associated with hazing rocked college campuses across the nation in 2017. University presidents at Texas State, Louisiana State, Florida State and Penn State sounded the alarms by temporarily shutting down Greek life activities until they could get their arms around the problem.

Some students suspected of hazing were arrested — a sign of changing cultural attitudes about the dangerous initiation rites. Some were kicked out of school. Commitments to zero-tolerance policies for hazing abounded.

But on the anniversary of the death of their son, Shawn and Sylvia Cumberland are still waiting for that sense of urgency and willingness to take action from the University of Texas.

Nicky Cumberland, a 20-year-old academic standout, died Oct. 30, 2018, after spending a month on life support in a coma. He was severely injured in a car accident on his way home from the Texas Cowboys’ annual retreat, where recruits were paddled and plied with alcohol and one student bit the head off a live hamster. The driver of the vehicle fell asleep at the wheel after the long night of activities. 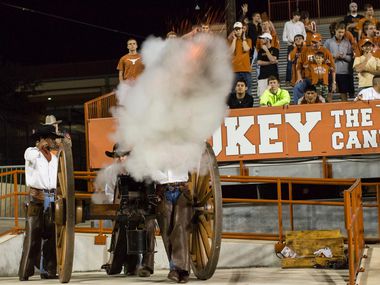 As the Cumberlands ramp up their efforts to end hazing across the country, they are starting with UT. They say the school has been slow and soft at every turn of the investigation into the powerful Texas Cowboys organization.

The Cowboys’ retreat and the car accident happened in September 2018. But the Cowboys kept partying until they were officially shut down in June, eight full months after the incident.

The elite, all-male student group hosted events at bars and invited their “Sweethearts,” the Cowboys’ sister organization. They held their formal induction ceremony with families, where new members received their custom Cowboy hats and chaps. They marched before cheering crowds in the Texas Independence Day parade. On Saturdays in the fall, they stood proudly on the football field and shot Smokey the Cannon when the Longhorns scored.

They did all this with Nicky’s initials monogrammed on their shirts, a tribute to his memory.

“They should have been put on probation immediately,” Shawn Cumberland said. “They shouldn’t have been allowed to keep going to parties during the investigation.”

J.B. Bird, a university spokesman, said the administration did prohibit the group from recruiting new members. However, university emails show officials had conversations with Cowboys leadership after hearing rumors that members were violating even that rule.

“It’s just best practice to hit the pause button until a thorough and proper investigation is conducted,” he said.

In some recent cases in which a student has died after suspicion of hazing, universities have responded by temporarily shutting down Greek life or the offending student group and doing wholesale revamps of policy.

At LSU, after a pledge died in fall 2017 after a long night of binge drinking, the university assembled a commission that studied best practices. The result: The university banned liquor and kegs at fraternity and tailgate parties and announced that any student caught hazing would be expelled.

Recently, universities have become stricter about hazing, even in the absence of a fatality.

Last month, Ohio State University suspended all fraternities after allegations of hazing surfaced against several of its chapters. And last April, UT-Arlington froze social activities for all Greek life after a raft of allegations about hazing, alcohol abuse and sexual assault emerged.

Slow to get started

Maguire said UT-Austin had no reason to give the Texas Cowboys the benefit of the doubt, considering the organization’s long history of hazing and branding members. In the 1990s, Gabe Higgins drowned in a river during a Cowboys retreat, which should have automatically triggered the university to investigate after Cumberland was first hospitalized, Maguire said.

Besides Nicky Cumberland, at least six people have died in hazing-related incidents at UT since 1986, according to a database of hazing deaths kept by Hank Nuwer, a Franklin College professor who studies hazing.

A law firm the Texas Cowboys hired first investigated the accident that killed Cumberland, reporting after a four-week review that his death should not be linked to the group’s hazing.

“It appears that the accident was just that, a terrible and unfortunate accident,” the Cowboys investigation concluded. Some hazing may have happened, they conceded, but the perpetrators were just “a few individuals that did not reflect the organization” and were kicked out of the group.